A small jet crashed this evening at Santa Monica Airport sending clouds of smoke into the sky.  A hangar at the airport was virtually destroyed.  CASMAT has determined that the tail number is likely N194SJ operated by CREX-MML LLC of Malibu.  The aircraft was a Cessna Citation 525A.  The crash was described by the fire chief as “unsurvivable”.  Link to photo here. 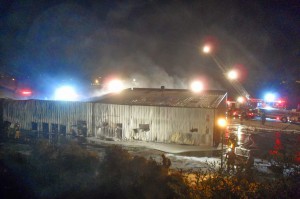 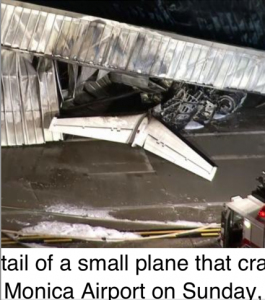 Video: (Click here if you don’t see it below in your browser) 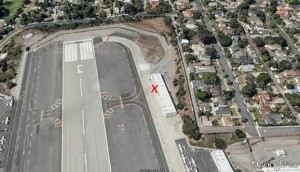 The nearest house is about 150 feet from the crash site.
The Cessna Citation 525A is a ‘small’ jet and carries approximately 3,200 lbs of fuel, it was probably nearly empty when it crashed on landing, yet the fire department were hard pushed to contain the fire.  The jet could just as easily have continued to slide straight down the runway, across 23rd street, and into houses.  See the picture above.  The community dodged a bullet.
See here for a detailed analysis of what might have happened.  It is scary! 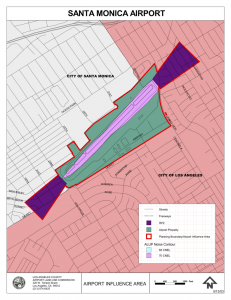 A Gulfstream 4, the largest jet that takes off from SMO, carries a maximum of 29,500 lbs of fuel (nearly 10 times as much).  If a Gulfstream were to crash on takeoff at SMO with a full load of fuel, it would likely take out multiple city blocks and kill scores of people on the ground.  The recommended takeoff distance for the G4 is 600 feet longer than the runway at SMO.  The FAA had to violate its own rules to allow it into SMO over the City’s protests (Santa Monica tried to ban type C & D jets in 2008).  SMO has no runway protection zones.  This is an accident waiting to happen, and when it happens, it will make this latest crash seem trivial by comparison.
This is the sixth SMO related crash this year, it looks like 2013 will be a year for the record books in terms of SMO crashes.  See here for a complete list of SMO related crashes and incidents (92 to date) since 1982.

Note from the chart above that although the number of incidents in the last decade has dropped somewhat from prior history (excluding the last two years), the number of fatalities has increased significantly.  Of the 51 fatalities associated with SMO since 1982, 36 of them (i.e., 70%) have occurred since the year 2000!