After averaging one crash/incident every 6 months over the last 4 years, SMO aviation has taken things to a whole new level in preparation for tomorrow night’s City Council meeting on the future of the airport.  Three planes associated with SMO have crashed in the last three days.   Two of them apparently crashed into each other today.

On Saturday (April 27th), a small plane N35884 made a belly landing at Van Nuys airport after its landing gear failed to lock.  Fortunately the pilot was not hurt.  See photos here.  N35884 is a 1976 Cessna 177RG registered to Bernard N Harris of Santa Monica.

Then today (April 29th), there was a mid air collision where one plane crashed into the mountains causing a fire and killing the pilot (and one other – see update below), the second plane was forced to belly land on a golf course in Westlake Village injuring three others.  According to Federal Aviation Administration spokesman Allen Kenitzer a preliminary review of radar records showed the two flight-paths crossed just after 2 p.m. A single-engine Cessna 172 (N4677V out of Santa Monica) carrying three people was flying west at an altitude of 3,500 feet when the second plane, also a Cessna 172, was heading East after leaving Santa Monica Airport for an engine test flight.

FAA records show the plane on the golf course (N4677V) is a four-seat Cessna 172 Skyhawk manufactured in 1980 registered to American Flyers flight school out of Santa Monica.  The two aircraft apparently collided in mid air.

This can only add fuel to an already raging inferno of public opposition to the airport.  We are lucky that all three Santa Monica aircraft crashed elsewhere, but arguments by aviation advocates that Santa Monica aviation is safe will seem pretty flimsy now.  It is this alarming rise in flight school related accidents over the past few years that has fueled public resentment.  The public perception is that flight school operations at SMO need to be shut down right now.  Period.  They are a safety hazard and a public nuisance and should not be happening in such a densely populated area.  The neighborhood dodged two or three bullets this weekend.  Enough already.

This raises the total to 85 accidents/incidents associated with SMO since 1982 (when records began).  For the flight schools, the score is now 26 all time.  Five of the last eight incidents (since October 2008) have been flight school related.  Something is very wrong at SMO, particularly with the flight schools,  and it needs to be stopped.

Below is a WebTrack image showing what appears to be the collision about to happen: 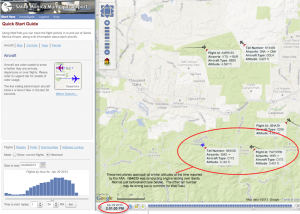 Although not yet announced by the FAA or NTSB, CASMAT believes the second plane that crashed into the hillside was N64030, a 1975 Cessna 172 registered to Edward Berlin of Santa Monica.  This aircraft conducted extensive engine tests over the SMO neighborhood shortly before the collision as shown in the screen shot below:

We must also ask ourselves if all those engine test box-pattern loops shown in the image above should really be happening over a densely populated area.

UPDATE 4/30/2013: A second body has now been found in the wreckage of the plane that crashed into the Santa Monica mountains

UPDATE 5/8/2013: Authorities have now identified the occupants of the second plane.