As of November 2012, the SMO Vector System (see here) landing fee system data now incorporates additional information for each departure including aircraft owner name and address as well as the aircraft gross landing weight, landing fees due, and whether the aircraft was exempt (i.e., did not pay the fees).  This improved data is a definite step forward in terms of the ‘openness’ promised as part of the ‘visioning’ process, and we commend staff for providing this data.

As you may know, aircraft based at SMO are currently exempt from paying all landing fees, an issue that continues to cause much public anger, given that the airport consistently looses money and must be subsidized by city taxpayers (see here), and that up to 60% of all SMO operations (and thus noise/pollution) have been shown by past CASMAT studies to be associated with SMO flight schools and training.

The FAA tower November operations report shows a total of 7,524 operations during the month, that is 3,762 departures.  During the same period the SMO Vector System recorded a total of 3,208 departures meaning that the system still misses over 15% of all takeoffs (down from 25% in March 2012 – see here), and these aircraft do not appear in the landing fee report, nor do they pay landing fees.

The recent staff operations study (see post here) showed that 12% of all operations at SMO are Touch&Go operations where the aircraft lands and then takes off mid-field and so is not seen by the cameras of the Vector System.  This activity is almost exclusively performed by the flight schools at SMO.  From this we can conclude that of the 15% missed departures in November’s report, 12% are due to Touch&Go activities by flight schools, and the remaining 3% is due to failed tail number recognition by the system (down from 5% in March).  The Vector System appears to be getting somewhat more accurate over time, but still misses around half of all SMO pattern flying activity due to Touch&Go operations.   The chart below summarizes the Landing Fee situation for November 2012: 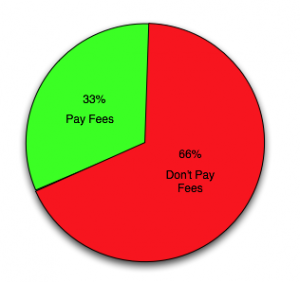 In other words 66% of all takeoffs from SMO do not pay any landing fees whatsoever.

In order to get a deeper understanding of exactly who is benefiting from this generosity on the part of the City of Santa Monica, CASMAT extracted the Vector System report data for November into spreadsheet format for further analysis.  This raw spreadsheet data can be found here.

The first thing we find is that of a total of $48,495 in recorded landing fees that were logged by the system during November, just $14,961 were actually billed (30%).  In other words, if November were representative of a typical month, the City is loosing around $402,408 annually, that is nearly half a million dollars in potential airport revenue each year.  Given that the airport operations loose around $800,000 per year on average, charging ALL operators landing fees (as proposed by the Airport Commission – see here) would immediately halve city losses at the airport.

Note that the true losses may actually be up to 15% higher due to the missed operations caused primarily by flight school Touch&Go activity.  We can estimate these losses by assuming all missed operations (620 in November) involve Cessna 172 aircraft – the predominant aircraft used by flight schools for training.  The SMO landing fee for a 172 is currently $4.14 which indicates total city losses per year from T&G activity are around $30,000 per year.  To upgrade the Vector system to include mid-field cameras would be considerably more expensive than this, and even then the chances of detecting most T&G operations are slim since they can occur anywhere on the runway.   From this it appears that the airport should not invest in additional equipment and development in pursuit of T&G revenues, the economics do not appear to justify the expenditure.  This conclusion might change if SMO landing fees were to be raised.

Just for the record, we predict that should landing fees be imposed on all operations at SMO, the percentage of Touch&Go operations at SMO may rise as flight schools seek to circumvent the system.  If/when this happens, installation of mid-field cameras may become necessary.  Adapting ground maneuvers to avoid restrictions is an on-going process at SMO.  It is through the use of the taxi-back maneuver that flight schools are able to circumvent the intent of the SMO pattern flying ordinance which would otherwise forbid all pattern flying on evenings, weekends and holidays (see detailed report here).  Closing this glaring loophole is another key issue that must be addressed at SMO.

CASMAT is currently conducting a petition asking that the City Council take action to implement the airport recommendations including landing fee changes.  We strongly encourage you to sign the petition if you have not already done so.

As to the primary beneficiaries of SMO largesse during November, those that stand out for various reasons (and the amount they saved) were as follows:

The first group appear to be commercial businesses flying larger aircraft out of SMO.  By far the largest beneficiary being Paramount Citrus.   The second group are the SMO-based flight schools.  The final group is particularly interesting because the records show multiple departures each day, and all using Cessna 172’s.  This data suggests that these operations may actually be engaged in flight training activity, and thus constitute additional ‘stealth’ flight schools operating at SMO.  Moreover, the flight school breakdown in the second group shows an anomalously low percentage for Justice Aviation, given that cumulative CASMAT studies (example here) have shown that Justice alone constitutes around 43% of all SMO flight school activity (see below).  We would thus expect the Justice total fee exemptions in group two to be considerably higher than the other flight schools.

The answer lies in the fact that Justice Aviation operates aircraft through a large number of holding and shell companies. We can determine this from the tail numbers using various other on-line sources.  Penetrating this kind of obfuscation constitutes much of the work involved in past CASMAT operations studies.  As it turns out, all but one of the entities in group three above, including OpenSky, Nashville Air, Nacell Aviation, Kylan Aviation, and Envision Aviation, are actually operated by Justice Aviation, even though their ownership shows otherwise.  In addition Justice operates through Olson Aviation ($132 – 27 flights), Pia ($58 – 14 flights), East Pole ($260 – 41 flights), Rowbot ($107 – 26 flights), Planeminder ($55 – 8 flights), James Conerly ($53 – 12 flights), and others.

Note that the SR20 aircraft N427GE is listed by the FAA as being operated by East Pole Aviation (a Justice surrogate), although the Vector System spreadsheet lists Cirrus Design Corp.  Ultimate Aviation appears to be a Santa Monica Aviation surrogate, and $318 should be added to their waived fees total.

Adding all the exempted fees racked up by all Justice entities (direct and indirect) during November, we reach a true Justice Aviation total avoided fees in November of $2,371.   This makes Justice Aviation by far the single largest beneficiary of Santa Monica City subsidies, ahead even of Paramount Citrus.  Given the total number of flights (mostly pattern flying) this represents, and the fact that pattern flying noise is the dominant and most annoying aspect of the SMO noise landscape, the logic behind the city subsidies for Justice Aviation (and other flight schools), around $5,000/month, is difficult to fathom.  It is apparent that Justice Aviation’s portion of flight school activity at SMO continues to rise steadily, from around 44% late last year to 55% this November.

Of the fees actually paid to the City during November, NetJets alone accounts for nearly 45% of all revenue with a total of $6,624.  This is because NetJets operates large jet aircraft, and so pays higher fees for each departure.

City staff has been conducting a landing fee study for the past few months.  We hope that the result of that study will be to force all airport users to pay fees, and thus stop the city hemorrhaging money at the airport (almost $0.5 million in unpaid landing fees per year) supporting profits for aviation businesses.  There is absolutely no reason why these businesses should not pay landing fees.

UPDATE 4/21/2013:  Apparently immediately after this post, airport staff reverted back to posting Vector data in the earlier bland format that contains none of the useful fields found in the November report.  This makes it difficult once again for the public to determine what is really going on.  The question is why the reversal?