Skip to content
JohnMay 17, 2012March 17, 2015 Commentary
My recent post concerning six foot rabbits made me think about carrots, and that in turn made me think about the City’s recently announced scheme to deal with the noise problem at SMO by paying the flight schools to fly to other airports and do their pattern flying there instead of over the neighborhoods surrounding SMO (see SMDP article).
At first glance the idea of using taxpayer money to pay flight schools to base themselves at SMO and fly elsewhere seems both offensive and ridiculous.  On the other hand, one has to give credit to the city for finally trying to do something about SMO after all these years of inaction.  Such a scheme might conceivably provide some short-term relief from the continuous noise caused by pattern flying, at least up until 2015 when the city would hopefully consider using a bit more of the stick, and a lot less of the carrot.
The reason the city’s current approach is all carrot and no stick is tied to the legal agreements in place regarding the airport and most particularly to the fact that the FAA, not the city, controls what aircraft do in the air.  As the proprietor of the airport, the City has certain proprietary rights to regulate what happens on the ground, and to adopt measures and ordinances that mitigate the impact of airport operations on the surrounding community, providing those measures/ordinances are fair and reasonable, and do not control what happens in the air.
So it is that the City cannot simply tell the flight schools to fly the pattern elsewhere, they must offer them a carrot to do so.  Joe Justice of Justice Aviation (the largest flight school at SMO) states in the SMDP article that it costs him $150 for an aircraft to fly roundtrip to a nearby airport, and so the city scheme involves covering some portion of that cost in the hope that flight schools will be considerate neighbors and take advantage of the program to lessen their impact on the community.
Whenever we talk about ‘pattern flying’, people who are not familiar with FAA parlance tend to think that we’re talking about something similar to what the Blue Angels might do at an air show.  Nothing could be further from the truth.  Pattern flying is the practice of looping within sight of the airport, landing and taking off again on each loop in order to teach or practice these maneuvers.  The predominant pattern flyers are of course the flight schools, of which Santa Monica has a higher proportion than any other local airport.   Each airport has a designated route that must be followed during this activity, that route is called the ‘pattern’ for the airport.
You know, perhaps the time has come to define a landlubber term for pattern flying so that we can be clear what we’re talking about.  From the landlubber perspective the primary sign of pattern flying is the almost continuous and disruptive noise of a prop-plane engine passing overhead every few minutes, usually the same engine, or one of two or three in the ‘pattern’ at any given time.  Landlubbers are subjected to what we will call Serial Circular Aerial Flatulence (SCAF) noise.  So we could call those that engage in this practice ‘scaffers’.  As anyone who has followed the comment streams in the local on-line papers knows full well, aviation advocates have their own derogatory term for us landlubbers, we are referred to as NIMBYs (Not In My Back Yard).  So perhaps we should coin our own word. Be honest, haven’t you always wanted to start a new word?  Let’s call the perpetrators SOBYs (Scaffers Over Back Yards).  Nope, no good because someone hearing the term might wrongly think it ended in ‘ies’.  Maybe SCABYs is better (SCaffers Above Back Yards).  Nope, nasty skin condition.  I can’t decide.  Anyway, I guess maybe that’s two new words now.  Aw heck, let’s just stick with scaffers.
Ah but I digress… 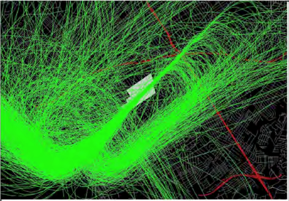 The image above shows typical daily aircraft patterns over SMO and the ‘racetrack’ traces to the south are the flight tracks associated with the scaffers.  Note how SMO scaffing impacts primarily Sunset Park, Venice, and Mar Vista.  In a recent interview with KQED Public Radio (here), Joe Justice said that perhaps a plane might fly to another airport four times a day as part of such a program.  Past CASMAT studies show that on average Justice Aviation uses roughly 3 planes on any given day for flight training purposes.  Other flight schools between them add perhaps another 4 planes to the mix.   Assuming the city covers 2/3 of the $150 cost, this gives us a rough estimate of the upper cost bounds for this program to the City (over a one year period – assuming full week coverage, not just weekends):
7 planes x 4 trips/day x $100 x 365 days = $1,022,000.
In other words, more than $2.5 million up until 2015.  That’s a lot of money.  Surely there must be a better use for such funds!  It is not hard to see why the flight schools might be willing to negotiate for their part of such a windfall, after all they have already devoured so many other carrots proffered by the City, they are likely terminally carrot-bound.
To give just a few examples, these businesses, like other Fixed Base Operators (FBOs) at SMO, negotiated for, and now hold, land and hangar leases at the airport that are pennies on the dollar compared to market rates.  Just one aviation business, Atlantic Aviation, sub-leases its City subsidized space (at market rates) to other non-aviation tenants to such a degree at it reaps a tidy $4-5 million income from it each year (see here).  Flight schools pay no landing fees whatsoever, unlike other non-FBO airport users.  The list goes on.   Carrot-bound as I said.  These businesses are on welfare, and it is the taxpayers of Santa Monica that are paying for it.
But, we should not criticize something without offering an alternative, so in that vein I offer the following alternative scaffing mitigation plan.
Silencer technology for small prop-planes has been around for years, and can make a huge difference to the noise impacts that they cause.  These silencers are beginning to be required by airports in Europe as part of noise mitigation efforts.  There are a number of manufacturers and devices out there that fit the Cessna 172 and similar aircraft used by the flight schools.   Many of these devices offer only marginal noise reduction (about 4 dBA), however some, like those advertised ‘here‘ offer from 9 to 15 dBA of noise reduction depending on engine type.  For every 3 dBA the noise is reduced by half, so clearly adding such silencers would make a dramatic difference to the community, given that flight school and training constitutes 60% or more of SMO traffic.   Among the other benefits claimed for these silencers are: 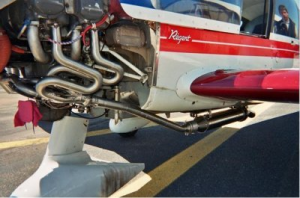 So, not only will fitting these silencers massively reduce the noise impact from the flight schools, it will also pay for itself in fuel savings within one year, while simultaneously improving performance and safety and reducing harmful emissions.  Moreover, the benefits are permanent and occur at all times the aircraft is used.  In other words 7 days a week (not just on weekends if that is all the city plan covers).
The big question is how much do the devices cost?  The answer is that depending on engine model, the cost is between $5,000 to $7,000 apiece (plus installation).   So to outfit all the flight school planes (lets say a total of 20 of them that are used for flight training at different times) would be a ONE-TIME equipment cost of at most $140,000.  Less than a tenth of the potential annual cost of the proposed City plan.
We are now left with two questions.  The first is that since the flight schools publicly claim they are doing everything they can to be considerate and responsible neighbors, and since this technology has been around for years so they could have installed it long ago and not only recouped their costs, but also improved their bottom line by long-term fuel savings and the reduction in harmful emissions that would have resulted, why have they not already done so?  Perhaps community wellbeing is not in fact a priority.
Secondly, why have airport staff not recommended to the City that they look into this approach, rather than the much more expensive and probably unworkable scheme that they are pursuing at present?  Let’s face it, the flight schools want to process as many students per day as they possibly can, because that’s how they get their money.  To think that they would voluntarily fly to neighboring airports for each lesson and thus burn up time that they might otherwise use to squeeze in more students, is optimistic in the extreme.  They would only do such a thing if the city payments more than covered their costs, including lost student revenue.   It almost seems like this poorly thought out scheme is expected to fail, but of course not before the upcoming elections.
So, might I humbly suggest that the City of Santa Monica seriously look into the silencer option.  Using its proprietary rights, the City could simply require such things, after all the devices claim to cover their own cost within a year and will significantly mitigate negative impacts.  However to require anything of anybody (other than their own citizens) might be deemed to be a ‘stick’, and there is obvious discomfort with the use of sticks anywhere near the airport.  So if it must be, offer a low interest loan (i.e., another carrot) to the flight schools, and perhaps to other SMO prop-plane operators, to install these devices.  The effect would be instantaneous, on-going, pervasive, and far more cost effective than the plan being negotiated right now.  Not only that, but it would also benefit the airport prop-plane operators themselves in long-term fuel savings and increased aircraft resale value.

For a complete NASA literature review (from 1995) of prop plane noise reduction technologies including both mufflers and the use of multi-blade propellors, see here.  It has been nearly two decades since then; the technology has now advanced considerably.  Also there is useful information here.

This is ‘green’ technology, city staff have been instructed to make SMO a ‘green’ showcase.  This is our chance to put Santa Monica into the forefront of ‘green’ aviation.

Seems like a no-brainer to me.  Harvey the rabbit likes the idea too, but he had one more question which is: “Why doesn’t the City seek suggestions from the community on these things?”.  Harvey is a bit paranoid because he thinks people don’t notice him.
Also, he wanted me to point out that he is actually 6 foot 3.5 inches tall, not six foot as I said in my earlier post.