JohnMay 29, 2012March 17, 2015 Commentary
The list of applicants for the vacant Airport Commission post is definitely looking like aviation advocates have mobilized, and are intent on derailing the public advocacy that has characterized the commission to date.  If there are any residents around the airport that are strongly motivated to ensure the airport commission continues to advocate for the public, they should consider applying for the position now.
The current list of candidates is shown below: 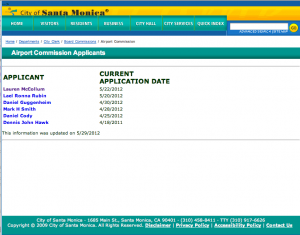 Daniel Cody (shown below) is a pilot who’s goal is to make SMO ‘the safest most efficient managed airport in the country’.  Not exactly a position that is compatible with the roughly  84% of survey respondents (in 3 separate surveys) that say they want aircraft operations reduced or eliminated.  Daniel was an unsuccessful candidate for City Council in 2010.  In an October 22, 2010 article in the Mar Vista Patch,  the following passage occurs regarding his position towards the airport:

“Candidate Daniel Cody said the flight patterns used by the schools are for safety. He was alone in his belief that Santa Monica should be making more money from the airport.” 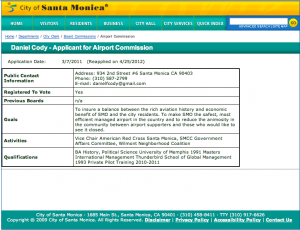 Daniel Guggenheim (presumably no relation to The Daniel Guggenheim, who in 1926 created the graduate school of aeronautics at Caltech) is a local lawyer who’s goal is to make the airport a good neighbor while ensuring that those who work there can continue to do so.  On the surface, this statement would appear to indicate a desire to largely keep SMO “as is”.

Dennis John Hawk is a local corporate and real-estate lawyer who’s contact address is at the airport, and who’s clients include airlines and aircraft owners.  One might suspect that Dennis has a significant financial interest in maintaining a vibrant aviation community at SMO. 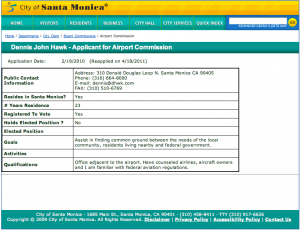 Lauren McCollum is a local real-estate developer and a ‘very active’ member of the SMO pilot community.  She keeps a plane at SMO.  Her stated goal is to represent the pilot point of view on the airport commission. 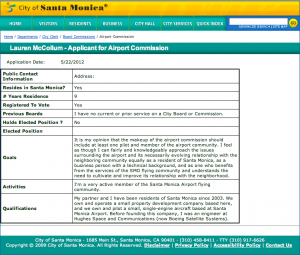 Lael Ronna Rubin, who’s goal is to ensure the commission reflects the concerns of the ‘entire city’ and not just the surrounding neighborhoods.  Lael is a lawyer who also recently applied for a position on the city Personnel Board. 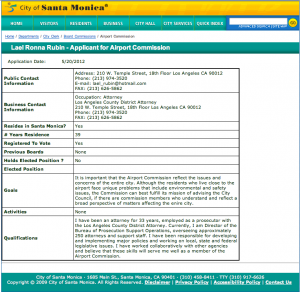 Mark Smith (see below) is a Sunset Park resident who is also a pilot and keeps/flies his Mooney single-engine plane at SMO.  In a November 26, 2011 story in the LA times he is quoted as follows: ” He said he has no patience for complaints about air quality, given the region’s car dependency. “If you’re concerned about pollution in Santa Monica,” he said, “then close down Ocean Park Boulevard and the 10 Freeway.”  I think we can be clear where Mark’s allegiances lie. 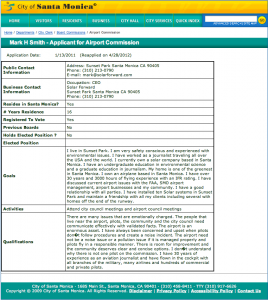