The CASMAT airport visioning survey has now been taken off-line so that we can begin the analysis of the considerable amount of data obtained.  This post simply presents the raw, unfiltered summary data so that the public response can be seen.  We received nearly 1,100 responses to the survey, however, after eliminating multiple responses by the same person, the raw total is down to around 1,025.  We still need to confirm the e-mail addresses supplied, since it is apparent that some at least are bogus.  We will be analyzing the data in detail in the near future, particularly the textual responses supplied in response to the open-ended “What would you like done with Santa Monica Airport” question.   These refined reports and what they mean for the visioning process going forward will be posted in the coming weeks.

The Summary PDF file shows the results for all responses to the survey (excluding the text question).  The results show among other things that:

While the majority of respondents were Santa Monica residents, we received almost as many responses from the surrounding cities.

The detailed responses including answers to the free-text visioning question are presented in three batches.

*On February 2, 2012 Justice Aviation posted as shown below on FaceBook, and another post by Friends of Santa Monica Airport (FOSMO) occurred at the same time.  This resulted in a surge of pilots from around the world taking the survey, despite the fact that they clearly do not reside in Santa Monica or the surrounds.  Note that the poster jokingly offers a FREE hour of flight time to anyone who takes the survey.  This surge peaked by the end of February 3, 2012 but resulted in approximately a 4% swing in the total survey results in the pro-airport direction.  Although we have left these responses in our data, since the net result had no real impact on the outcome, we have separated out the bulk of this peak into the “Batch 2” file to make it clear how during this peak, response percentages were flipped on their head (there were still residents taking the survey during this period so the data for these two days is not completely unilateral).  The ‘international’ responses (as indicated by the geo-coding data showing in Batch 2, which shows exactly where the survey was taken, despite claiming a 90405 zip code) continued at a lower level for up to a week after this two day period.  Countries involved included  Israel, Guatemala, United Arab Emirates, Spain, Germany, United Kingdom, Italy and of course just about every state in the union including a few that were actually from California.  This willingness to try to ‘game’ the CASMAT survey process lends credence to the press reports that pro-airport groups effectively gamed the city visioning process also by loading up visioning groups with pilots, many of whom were not from the surrounding neighborhoods. 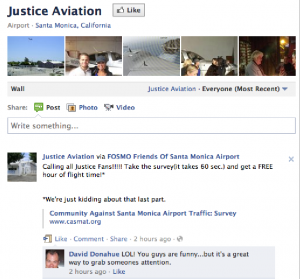 Flyers advertising the CASMAT survey, as well as the city visioning sessions, were hand-distributed to residences within the areas shown on the map below.  The Sunset Park area received flyers on two different occasions, each of the other areas received just one due to the significant costs associated with this method of reaching the community.  Some of the neighborhood groups in these areas e-mailed their residents at our request, others chose not to.  However, we feel that only by distributing flyers to all the areas surrounding SMO in this way,  can we be sure that our survey accurately reflects the wishes of all parties impacted by the airport. 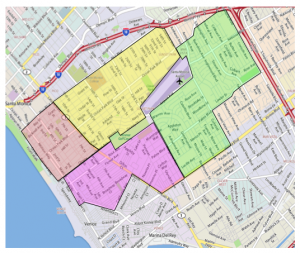