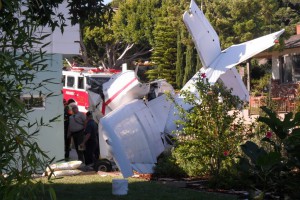 Monday August 29, 2011. A Cessna 172 crashes into a house on the corner of 21st and Navy. Fortunately the pilots injuries were not life threatening. A painter was working on the outside of the house at the time and was struck by debris. Bystanders managed to pull the pilot out of the wreckage and put out a small fire using a garden hose. The plane first hit trees before slamming into the ground nose first.

Update: See comments for details.  Plane was operated by Justice Aviation (Flight School).  This makes an average of one crash out of SMO every 6 months recently for Justice Aviation.  Two pilots killed.  Justice Aviation issued the following written statement regarding this latest crash:

“in 20 years, and with more than 2,000 students, none have suffered serious injury in a crash”