The following is a copy of an email sent by Nelson Hernandez, Senior Advisor to the City Manager: 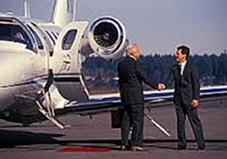 On March 1st, Mayor Vasquez received a letter from the National Business Aviation Association (NBAA).  The NBAA represents 10,000 corporations that use jets to fly corporate chiefs about the U.S. in private luxury.

The letter, from NBAA COO Steve Brown to Mayor Vazquez states that the city’s fight for local control, “…may lead to severe sanctions, such as the termination of all federal transportation grants to the City.” He goes further to say to Vazquez “I once again urge you to stop enabling a vocal-but-misguided minority of Santa Monica residents…”  Rather than acknowledge property rights and the results of democracy, e.g. the crushing defeat of the NBAA sponsored Measure D, and the huge victory of Measure Local Control, the NBAA has a new tactic to subvert the will of Santa Monica citizens; a tactic that could only spring out of a corporate boardroom.

Mr. Brown closes his letter with: “The City – like most communities across the U.S. – should recognize that its airport is a valuable asset, and on that basis act as a good steward of SMO – a policy which would benefit its residents.” Perhaps Mr. Brown can say this because his home is not 300 feet from the SMO runway. The City is delivering on the will of its voters and the health and safety of all the residents that live with the negative impacts of the airport.

The Chief Operating Officer for NBAA is telling our Mayor and the people of Santa Monica that if we continue our work to reclaim the land that belongs to us, they will demand that the Federal Department of Transportation (DOT) withhold funds for Santa Monica roads and public transportation!  The NBAA will urge the federal government to take away funds we use to build and repair roads and keep cars moving if we continue to reclaim local control over public property.  The best way to explain my reaction to this threat is to recall my one semester of Yiddish, (yes I took Yiddish in high school) what chutzpah!

Elimination of DOT funds would impact not just Santa Monica residents, but the region by affecting the 17,000,000 people who ride the Big Blue Bus on an annual basis.  (I can’t remember the polite Yiddish word for chutzpah plus.)  And who are our bus riders?  Well, although bus rider surveys do not typically ask if they also commute by jet, I will take the risk, and assume that at least 99% of the people who rely on the bus don’t regularly commute by corporate jets.  They are hardworking people, those with disabilities, seniors, students, public transit enthusiasts, environmentalists, bicyclists, and those who may not have the means to own a car, much less a jet.

So why does NBAA make this threat?  Hard to say, perhaps Mr. Brown believes this will intimidate Santa Monicans and force us to stop our fight.  But he is wrong. We will continue our efforts to regain control of public land. We will not succumb to NBAA’s intimidation tactics because we know there are no monsters under the bed.

As Mayor Vasquez said, “Santa Monica is a recognized national leader in mobility and we proudly offer transportation choices to all, including those who cannot afford a jet.  Of course, this latest threat, nor the others that are likely to follow, will deter us from regaining what belongs to the people.”