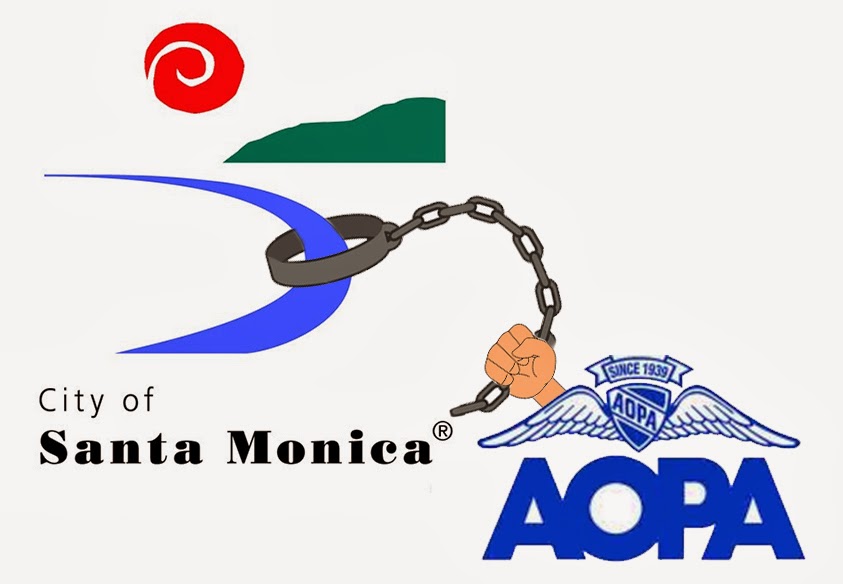 “As soon as the City Council voted last week to begin a process to possibly reclaim our land from the Federal Aviation Administration, the Aircraft Owners and Pilots’ Association (AOPA), the lobbyists for the aviation industry, made their move, coming up with a ballot initiative that pretends to be against development at the airport, but is actually designed to prevent Santa Monica from shutting the airport down or even limiting aviation operations,” said Michael Salazar of Airport2Park.org, the organization residents formed last year to turn the airport land into a great park.
“The initiative was filed by three Santa Monica residents (one of whom is a lawyer for a law firm that specializes in ballot measures), but it was obviously orchestrated by AOPA, which promoted the initiative on its website within minutes of filing of the paperwork with the Santa Monica City Clerk. The initiative says that it’s to prevent development at the airport,” Salazar said, “but in fact AOPA wants to stop a planning process the council began last week for the express purpose of ensuring that the airport land will never be intensively developed.”
“If they can fool enough people into signing it, it’ll be on the ballot in November, and the aviation industry will flood Santa Monica with money to get it passed. If it does pass, Santa Monica could be handcuffed to corporate jets forever. The initiative would change the City Charter to benefit just a few people. We’ve got to stop this big lie.”
The initiative purports to give residents the right to vote on changes to the airport, but this is a right they already have. Any action the City Council takes regarding the airport can made be subject to a referendum if 10% of registered voters sign petitions. This was recently demonstrated in Santa Monica when the Residocracy organization obtained enough signatures for a ballot measure that would rescind the council’s approval of an unpopular development.
Salazar said that the real purpose of the initiative is to handcuff the City from running the airport in any way that the aviation businesses there don’t like. Section 2(b) of the initiative says that the City won’t “impose additional restrictions on providers of aviation support services to tenants and airport users and inhibit the sale of fuel of the full use of aviation facilities,” and additionally gives the right to “any person with a beneficial interest in the operation” of the airport to sue the City to enforce the initiative. This could mean, among other things, that the City would have to continue 30-year-old leases to aviation tenants at below market, subsidized rents.
Airport2Park.org and anti-airport groups like Community Against Santa Monica Airport Traffic (CASMAT) and Concerned Residents Against Airport Pollution (CRAAP) have joined together to combat the misinformation AOPA and its signature gatherers will be spreading. “The claim that closing the airport will mean ‘high-density’ development is an outrageous lie,” said Salazar. “At its hearing last week, the council specifically instructed staff to initiate a ‘concept plan based on low-intensity use’ for the airport. Council members unanimously opposed any high-density development at the airport should it be closed. The most likely outcome is a great park, which Airport2Park has shown can be funded without money from developers. The AOPA is masquerading its petition as preventing overdevelopment when it is in fact their tool to keep jets and planes flying over local homes, creating noise and pollution, and threatening health and safety. It’s really a ‘Kill the Park’ initiative.”
For information on Airport2Park’s and other organizations’ plans to counter AOPA’s petition and initiative, contact Airport2Park at airport2park@gmail.com.
Meanwhile, tell all your friends about this deception.  The more people that know about it, the harder it will be for them to fool people into signing their petition.