CASMAT is now one of the founding members of the newly formed Airport2Park.org group.  We strongly endorse the group and its goals.  With all the recent developments and understanding of the legal constraints (or lack thereof) surrounding SMO, we believe it is now realistic to expect that airport operations and land will be significantly, if not totally, curtailed come July 2015 when the agreements expire.  We have posted on this before.

Consequently, CASMAT together with other groups and community members have formed an alliance in order to make sure that the wishes of the community for the future of SMO, as expressed in three independent surveys (including CASMAT’s own involving 1,100 respondents), are carried out.  All three surveys showed overwhelming (i.e., over 80%) approval for ‘green’ uses such as a park.

The public has spoken, the opportunity is here, now we need to make sure it happens.

This is your chance to help define a ‘Santa Monica Great Park’ that may be over twice the size of all other Santa Monica parks combined, nearly 1/3 the size of New York’s Central Park.  We have a once in a generation opportunity to benefit all who live in and around Santa Monica.

Below is the announcement from airport2park.  We also strongly recommend you visit the web site. 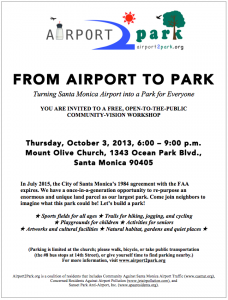