At Monday’s Airport Commission ‘Visioning’ workshop, the community was shown the first fully realized visioning ideas for the Santa Monica Airport.  See here for video and audio of the meeting (the April 23, 2012 entry).  These ideas do not represent official City of Santa Monica policy.  The ideas were put together and presented by David Koo and Mathew Ottoson, urban planning students from the California Polytechnic University with their advisor Michael K. Woo, Dean of the College of Environmental Design at California State Polytechnic University, Pomona.  The community would like to thank these presenters for all their work on creating and presenting these visions.  The land uses proposed are consistent with the results of the CASMAT ‘visioning’ survey as far as meeting the wishes of community concerning a ‘green’ future for the airport land.  The full PDF for their slides can be found here.  Given the constraints on the three land parcels associated with SMO (as explained by other presenters at the meeting – see earlier post), the team presented three alternatives. 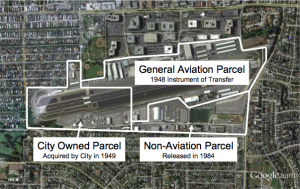 The first alternative titled “Airport Refocus” was based on what would happen if the city simply removed the ‘city owned parcel’ as it has the right to do in 2015.  This would leave a shorter runway in the ‘general aviation parcel’ that would be too small for jet traffic to take off and land.  The overall plan view for this alternative is shown below: 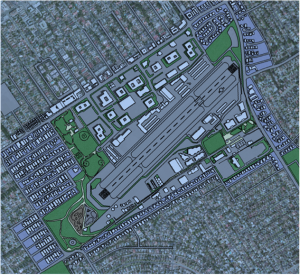 As can be seen, the plan adds park space primarily at the west end of the runway allowing the playing fields at Clover Park to be connected all the way through green space and walking/biking tails to the Pennmar golf course and to an upgraded Airport Avenue with additional venues and public facilities.  Below we see before and after renderings of the view along Airport Avenue for this alternative:

The second alternative presented was titled “Urban Park” and drew ‘oohs’ of appreciation from the audience when it was shown.  In this scenario the assumption was that the city was able to eliminate aviation entirely from SMO thus freeing up all three parcels (227 acres) for improved use.  The entire  land area is devoted to park space and sports activities and the plan includes the upgraded features on Airport Avenue.  The plan allows pedestrian and bicycle traffic to freely move through the space occupied by the current airport and would be designed to connect this open space to other trails.  There is the potential for creating a local ‘carbon offset’ program and perhaps a regional destination in this plan.  Construction and operations cost for such a large park area are a concern, and ways to mitigate these costs (including alternative energy) should be explored. 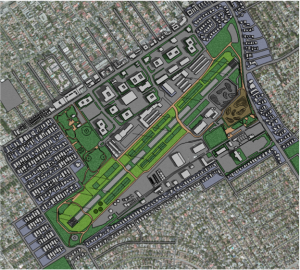 Below we see before and after renderings of the “Urban Park” option.  Note that a significant portion of the landing strip itself might be preserved for use only in case of emergencies. 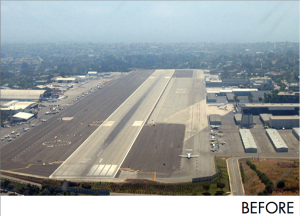 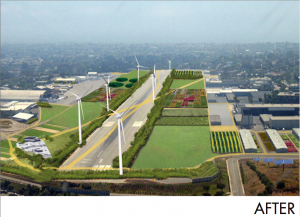 The third and final option presented was entitled ‘Eco-village’ and once again is based on the assumption that the city is able to re-claim all three airport parcels for alternate uses.  In this idea the airport land would become a world-class eco-friendly village and integrated park.  In addition the plan would continue certain streets allowing traffic to traverse the airport area in multiple places rather than being squeezed around either end of it (as is the case today which results in traffic issues in the neighborhood).  It is hoped that any additional traffic caused by the building use in the eco-park would be fully or partially offset by this relieving of the existing traffic problems caused by the traffic ‘obstruction’ that is todays airport.  This would need to be fully studied.  The eco-village would embody alternative power sources, would integrate fully with existing and alternate traffic solutions and would showcase modern water capture and urban farming techniques to create a net-zero carbon footprint.  The scope of this project would require full community buy-in and it would constitute a long-term investment on the part of the City and the community. 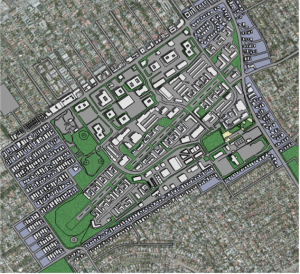 The rendering below shows the appearance envisioned for the Eco-village approach.  As with the Urban Park idea, this approach keeps the clear line of open space allowing unobstructed views to the West of the ocean and in the other direction to the mountains. 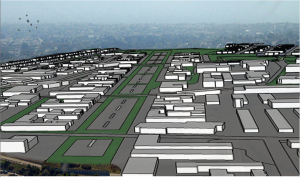